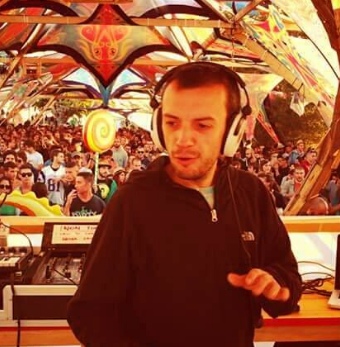 In a world of hyper-production and increased commodification of musical experience “Atriohm” stands for eerily seductive and taunting musical expression that helps the audience indulge in deep psychedelic experience.

Looking at its beginnings, “Atriohm” project started in 2003 as a musical adventure of Golcev brothers, Sashe and Leonid. Their musical creativity, existential experiences and individual desires received their ultimate expression in 2009’s ground breaking work of psychedelic music: “Ukalen.” While looking for modern psychedelic sound that was inspired by their hometown Skopje and dramatic Macedonian landscapes, the real success of their musical enterprise was in pointing toward the horizon to what psychedelic music could evolve. In the aftermath of their release, Sashe’s and Leo’s ongoing artistic metamorphosis has led brothers to part their musical ways and focus on their individual musical development. Leo meanwhile has a successful psychedelic chill and trance project Tengri, while Sashe remains the driving force behind the Atriohm.

Musically, Atriohm’s work is focused on a narrative, on telling a story through sound. It features an eclectic blend of analogue, hybrid acoustic, dark and distorted textures, punchy basslines, expressive leads, colorful pads and soundscapes. It’s a brooding, eerie, shadowy, noisy, swarming elegy of sound that not only draws in the audience but slowly subverts their expectations. Pick any among the recent tracks scored by Sashe Golcev and what is heard reflects the work and mindset of a producer who has not only reconciled his imagination with radical fringes of music making, but feeds on the friction between past musical influences and uncharted psychedelic musical territory.

Through his ability to balance themes both idiosyncratic and heartrending with tonal palettes unlike heard elsewhere in Psychedelic music scene, Atriohm remains one of the truly great embodiment of this genre and its culture.